Throughout mankind’s historic observations of Earth and the cosmos, there are several first-hand and recorded events of both minor and major proportions. Some of these minor and scientifically proven events include: recurring comets, near misses by meteors, and Sun flare activity. Although most of the events that would be considered “major events” have not been observed first-hand or proven scientifically, they are often referenced in ancient literature and some even substantiated by cosmic and geological evidence.

Cosmic events often leave little obviously direct cosmic or geological evidence to prove their existence or the affects that may have resulted from their interaction with our solar system, but that also doesn’t conclude they never happened. 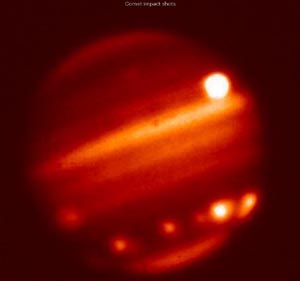 Take the comet impact on Jupiter in 1994. By observing the event in 1994, we have direct proof that it actually happened, but what if we hadn’t observed this event? In this case, our current observations of Jupiter would leave little or no proof the event ever happened. The planets in our solar system are spread out far enough to make direct observation and conclusion of past historic events almost impossible. In fact, it appears that we are still trying to prove many of the obvious events on Earth even though we have had direct observation capabilities for hundreds of years.

From various archeological finds on Earth, it’s known that many ancient cultures had advanced knowledge and understanding of our cosmos even when it appears they didn’t have the technology for direct observations. From translations of their ancient records, it’s obvious these cultures observed events that had major impacts on Earth and other planets. Often these records are considered myth or legend by current astronomers and scientist since they can not be empirically proven. That doesn’t mean these events never happened. It only means that we didn’t observe them first-hand and are unable to prove they ever happened.

Some of these events reference times when the Sun was angry and hostile. Other events reference objects passing through our solar system and making changes along the way. So, do we just throw out and discard all ancient literature because we can’t prove it? That’s what most science is doing today. They ignore calendaring systems that are based on harmonics they do not understand. They ignore ancient records that describe cosmic and geophysical events of a catastrophic nature. They even tend to ignore the correlation of similar events as described by unrelated ancient cultures.

With all of this resistance to the possibility that ancient cultures actually did observe cosmic and geophysical events of a cyclical and catastrophic nature, it’s no wonder that we are ill informed on what’s coming in our near future. This website is based on research that attempts to sift through the current changes to our solar system and correlate this data with ancient references to cosmic forces that have not yet been observed by modern man.

Some of the cosmic events considered by Timeline To The Future include: the Sun, comets and meteors, PlanetX or Niburu, SuperWave, Plasma Ribbon, weakness in the Sun's heliosphere, and a cyclical alignment between the celestial equator and galactic equator. According to all accessible data, each of these events has cycles and patterns that range anywhere from a few years to several thousand years. After looking at the current changes to our solar system, ancient historic references, scientific data on Earth changes, and future prophecies, Timeline To The Future concluded that the approaching alignment between the celestial equator and galactic equator is the event with the highest probability of creating these cyclical events.

In fact, recent scientific information confirms that changes are accelerating as we get closer and closer to this cosmic alignment. For a greater explanation of the galactic equator and its potential impact on Earth, the Sun, and our entire solar system.

One recent change that has scientists very concerned has to do with the heliosphere around our Sun? The helioshpere (see below figure) is the electromagnet field generated by our Sun and which protects Earth and all other planets in the solar system from gamma and synchrotron radiation that comes from the Milky Way galaxy. Around 90 per cent of the galactic cosmic radiation is deflected by our heliosphere, so the boundary protects us from this harsh galactic environment. In 2008, this was found to be 25% weaker than it was just 10 years ago. Although there is little known about long-term fluctuations in the heliosphere, scientists’ state this is the lowest level ever recorded in the 50 years of direct observation. Scientists are both baffled and concerned by this important development as radiation is more easily impacting Earth and every other planet in our solar system. 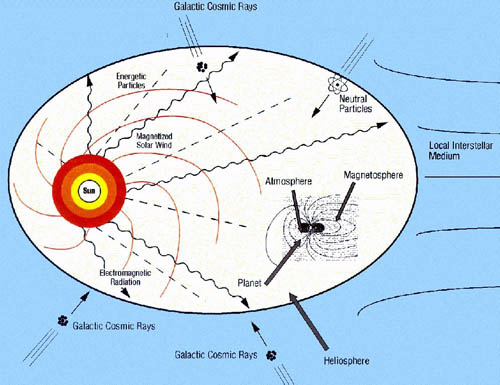 Now there are scientific references to the possibility that our Sun is losing mass, but gaining energy. We just entered, what is known as, “Solar Cycle 24” for the Sun. Solar Cycles are historic patterns of activity on the surface of the Sun. NASA, NOAA, and ESA are predicting that Solar Cycle 24 could be up to 50% stronger than its 'record breaking' predecessor Cycle 23 which produced the largest solar flare ever recorded. The Sun will reach its 'apex' (maximum of this solar cycle) in late 2011 into 2012.

An intelligent person would ask if these changes to the Sun are just coincidence. Then if you throw in all the changes happening on Earth and other planets in our solar system, we must take notice that something unique is happening. It is a known fact that the human energy field is affected by external forms of radiation. This includes radio, microwave, gamma, etc. There are many who believe the change in magnetic influences from the Sun or the radiation that we’re being exposed to from the galaxy may usher in what is described by our ancient ancestors as "the transition" bringing us to a new state-of-being.

Translations from virtually every ancient culture speak of cosmic events that virtually destroyed Earth and mankind. They also mention that only a few people will survive these events. Some cultures describe an event as the “red fiery dragon that shook the heavens”. It turns out that nearly every culture has a myth or legend of a battle in the sky between the Gods. Usually, these myths describe the cause of this event as God's who were angered by the people on Earth. Is it at all possible that these are actual events that became myth or legend as time passed and fewer and fewer people actually believed them to be true?

There are also ancient references to collisions and near misses between rogue objects and planets within our solar system. One such reference involves Mars, Venus, and what is commonly known as PlanetX or Niburu. The reference speaks of a cosmic entity (Niburu) that passed close to Mars on its way through the solar system. It apparently got so close to Mars that it created a vacuum that sucked the atmosphere from Mars as it passed by the planet. These same references speak of a new planet being created in our solar system as a result of this cosmic event. They named this new planet “Venus”.

Then we have references from ancient Egypt that describe how, twice in there recorded history, the Sun did not rise or set for a period of three days. They further described that when the Sun did rise again, it came up on the opposite horizon. Do you realize what this means? There are only two ways this is theoretically possible.

First is that Earth completely stops spinning for a period of three days and then starts spinning in the opposite direction. As much as people would like to believe, the magnetic poles do not flip if Earth keeps spinning in the same direction while the geographic poles shift 180 degrees. Also, if Earth continues to spin during a 180 degree geographic pole shift, there would not be three days of darkness during the event. The second is if something passes between Earth and the Sun, but close enough to Earth in order to create an eclipse affect for a period of three days. It would also require an electromagnetic force that is strong enough to stop and reverse Earth’s rotation. Again, the only way this can theoretically happen is if Earth “stops rotating and spins in the opposite direction”.

Earth changes of this magnitude and those found by present day geologists can only occur if Earth is influenced by a powerful external force. The physical data indicates that there is not enough natural energy in the planet to cause the kind of abrupt and monumental movements of the Earth's crust that have been proven to occur throughout Earth’s history. This is also true of any future catastrophic or cataclysmic events of a similar nature.

There have been observed and documented perturbations (variation in a designated orbit) of Neptune and Jupiter within the last 40 years. Documentation of these perturbations can even be found in the public media as they describe the orbits, of both planets around our Sun, having been altered by some external force. Ancient civilizations describe similar observations.

Recent news of our solar system indicates there are changes occurring on every planet including the Sun. These changes include: higher luminosity, thicker atmosphere, and higher energy field. The scientists assert these changes are the result of external forces acting on our “entire” solar system. Some of the specific changes include: the polar ice cap on Mars is melting, the chemical makeup of Jupiter is changing, the storm on Jupiter’s surface recently started spinning in the opposite direction, and Venus is experiencing storms that have never been seen before. These are recent scientific discoveries, but there is never any conclusion from the scientific community about what’s causing them.

Through years of research and observation of the unfolding of events, Timeline To The Future has concluded that the alignment between the celestial equator and galactic equator is the only known event with a reasonable probability of creating the recent and cyclical pattern of events in Earth’s past, present, and future.