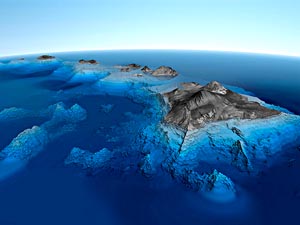 Island Locations: The most obvious risk to living on an island is the basic fact that islands are the exposed top portion of submerged mountains. The relative risk is related to the probability of a geographic pole shift or any other cosmic or geological event that could create shifts in Earth’s crust, massive earthquakes, or movement of fault lines and tectonic plates. Any one of these events would likely result in the movement of large amounts of water around the world.

We’ve all seen the consequences of such events in our lifetime with the earthquakes followed by tsunamis in Sumatra in 2004 and Japan in 2011. Click here for an interactive view of the before and after images from the 2011 tsunami in Japan.

Before and after images from Samatra tsunami in 2004

Before and after images from Japan tsunami in 2011

The greatest risk is the fact that islands are the tops of submerged mountains that are either part of an entire mountain range or a volcanic ridge. In either case, islands are positioned directly on or near major fault lines in the Earth’s crust. The sudden movement of these underwater fault lines or tectonic plates creates shock waves which are then transferred from the rock vibrations into water vibrations or waves called tsunamis. 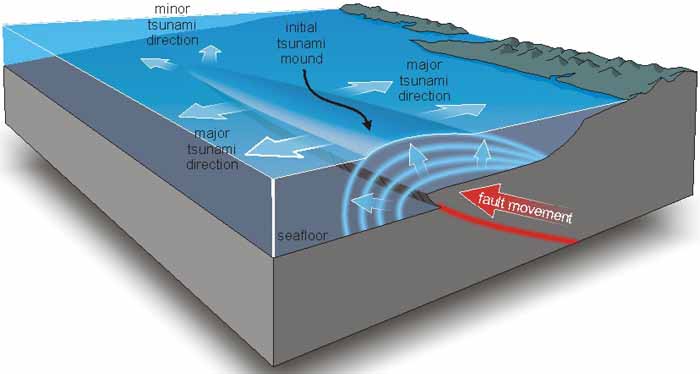 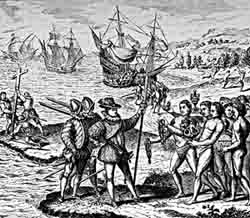 Besides the destruction from tsunamis experienced in our lifetime, there are numerous references to ancient events from the forces of water. When Columbus visited the islands in the Bahamas, he wrote that every culture had a similar story about a time when the oceans wiped out virtually all life on the islands. Of course, we must also consider that some people must have survived to pass these stories down through history. We also have references in the Bible and many other ancient scriptures about a great flood that reached virtually every continent. You could also speculate that such events account for why there is little or no trace of ancient civilizations ever existing on Easter Island, the UK, or any other island for that matter. 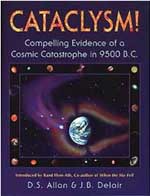 Many in the scientific community might dispute the historic existence of global flood events in past history; however, others have concluded that such events have occurred in our past. A recent book entitled “CATACLYSM!: Compelling Evidence of a Catastrophic Event in 9500 B.C.” contains scientific evidence of such an event. This book combines geological and archeological research to support their finding of a global cataclysm event about 12,000 years ago which ravaged the planet with the destructive force of shifting in Earth’s crust and from water. The authors of this book also concluded that a majority of human and animal life was eradicated in this event. 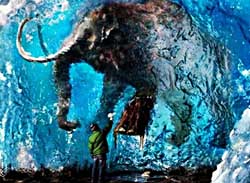 By now, it should be no surprise to anyone that Earth’s magnetic poles are moving and that the affects of such a shift are relatively unknown. Many people may also be aware that magnetic pole shifts have occurred in Earth’s past history. Likewise, it’s also true that the geographic poles have been located in different positions around the planet. This is evident by observing entire regions and continents that have been transformed from tropical to frozen and visa versa. In fact, it is common knowledge that the North Pole has moved from the Northern U.S. into Northern Canada and could be why Mammoth's and Rhino's have been found frozen in Russia with fresh grass still in their mouths. 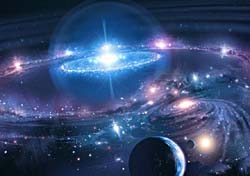 What most theorists and scientists don’t generally agree on is whether magnetic pole shifts and geographic pole shifts are related or occur in close proximity to one another, how long they take to occur, and how far they move. From a position of probability, there is no proof that a geological pole shift will occur through the coming events; however, the probability of Earth being influenced by some external force has real scientific backing. If such an event were to occur, it is very likely to result in massive shifts in Earth’s crust and possibly catastrophic movement of mountains, mountain ranges, volcanoes, and islands. 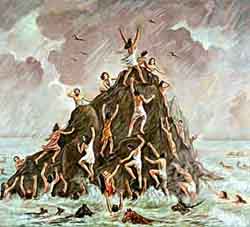 From a prophetic point of view, the predicted events are similar to those that have been passed on through history. The great heat that scorches the Earth, massive die off of life, great earthquakes, and great floods. In fact, if you believe at all in the Bible prophecy, known as “Revelations”, then the simple statement that “all mountains and island will be moved” may be all the explanation that is needed. If you believe in a physical pole shift, then you must also believe in the corresponding shift in Earth's crust. This means that any mountain range (also know as islands) will be thrust either upwards or downwards as they are on the exact fault lines where these movements occur. This is also how entire continents or portions of continents could theoretically be either submerged into the ocean or pushed upward from the bottom of the oceans.

The speed of such events is also relevant to the potential risks. Depending on how fast the potential events occur will affect all of the possible consequences. If it occurs slowly over a hundred or thousand years, then risk of tsunamis may not be a issue for anyone except those living in coastal areas. Although scientific evidence indicates past events have occurred rapidly and the resulting tsunamis wiped out most everything across the entire planet, there is no way to know for sure what will happen this time. 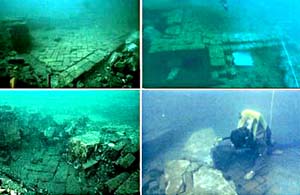 If continents such as Atlantis and Lemuria really existed, you can get a picture of just how severe the shifting of Earth’s crust and continents may be. Even if you don’t believe in Lemuria or Atlantis, one must consider the fact that there are ancient cities under every ocean on the planet. And although most people may be unaware of these underwater cities, the reality is that they exist and were above water at some time in our past. This may also explain why most ancient maps depict islands and land masses that are not visible today.

The potential for upward and downward movement in the coming events should be considered with equal sincerity as those that have been proven to occur in the past. The resulting tsunamis from such movement present a serious risk to any islands and coastal regions.

If you consider the speeds (up to 500mph) and forces (wall of water 50-100 meters high) of a tsunami created by massive shifts in Earth’s crust, it’s easy to see how the risk from such events is unimaginable. The physics of hydrodynamics (the study of motion of liquids) is far too complex to describe here with any meaning, however, the only real question s are how far inland and how high a tsunami might climb a mountain in its path?

There are those that would like to believe a tsunami will flow around an island rather than flow over the top. Those who are familiar with hydrodynamics know that although some water may be deflected around the peak of the mountain, the majority of the force will move in a straight line up the mountainside and depending on the terrain, may move through and possibly over the island. Of course, combining the possibility of extreme upward and downward movement with the potential for massive tsunamis represents a very high risk to island life.

The most important factor when making any decisions is learning how to balance our intellectual knowledge with our intuition. Basing any decision on one without the other is only utilizing part of your consciousness. By understanding the physical possibilities of these times and combining that with the spiritual possibilities of these times, anyone can make an informed decision about choosing a location. This means that it is important to gain knowledge and wisdom about Earth’s history and your inner self before making any decision.

Those who make decisions without putting in this effort may explain why so few people survived the previous cataclysmic events. Here is an example: Only after the extensive research to create this “Where Will It Be Safe?” document, did it become obvious that the highest risk locations are in mountainous regions. This was an unexpected observation. Realizing that islands are simply the tops of mountains may be enough for some people to draw the same conclusion; however, we hope this write-up provides any additional information necessary to make an informed decision about choosing your location.

For more information on the risks for mountainous regions, please refer to our write up on Mountain Locations.